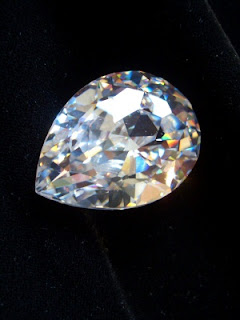 Although Phoenix Diamonds are REAL, the fakes are very good – but just not real diamonds

Moissanite is silicon carbide and is used in jewellery, it is called Moissanite after the jewel’s discoverer Dr. Henri Moissan.

Unlike diamond, Moissanite is strongly birefringent. This quality is desirable in some optical applications, but not in gemstones. For this reason, Moissanite jewels are cut along the optic axis of the crystal to minimize birefringent effects. It is lighter (density 3.22 vs. 3.56), and much more resistant to heat. This results in a stone of higher lustre, sharper facets and good resilience. Loose moissanite stones may be placed directly into ring moulds; unlike diamond, which burns at 800 °C, moissanite remains undamaged by temperatures up to twice the 900 °C melting point of 18k gold.

In 1998, Charles & Colvard introduced jewel-quality synthetic silicon carbide to the market under the name “moissanite“. This gemstone possesses superior fire and brilliance to diamonds. Upon introduction, some jewellers misidentified moissanite as diamond. Moissanite’s thermal conductivity is very close to that of diamond, rendering useless the older thermal testers that they relied upon. Moissanite has a slightly higher index of refraction (brilliance) and much greater dispersion (fire) than diamond, as it shows many more “flashes” of colour than a diamond. Unlike cubic zirconia and other diamond simulants, moissanite does not cloud over time, and is extremely durable.

Once its properties are known, moissanite is easy to distinguish from diamond, as it is doubly refractive and has a very slight green, yellow, or grey fluorescence under ultraviolet light. Because the brilliance of the moissanite helps to cancel the perceived colour, cuts with higher brilliance tend to have a much “whiter appearance” (i.e., round brilliant, square brilliant, and cushion cut) versus cuts that have a lower refractive index such as the marquise, radiant and especially the pear-shaped cut. The colour is often defined as “near colourless” which on the diamond colour scale ranges from G through J.

Charles & Colvard markets moissanite primarily to self-purchasing women. However, moissanite engagement rings, eternity bands and circle pendants have become popular among value-conscious consumers. For example, in the trade, a 1-carat (200 mg) moissanite gem sells for about $500 (2007 USD), while a diamond of similar size and colour typically sells for $4500 or more.

Tweet
Get in Touch >>
Memorial Diamonds have been supplying man-made diamonds since 1985, principally using the carbon in cremation ashes or carbon extracted from hair.
Memorial Diamonds Part of the Phoenix Group