The worlds first diamond from an umbilical cord 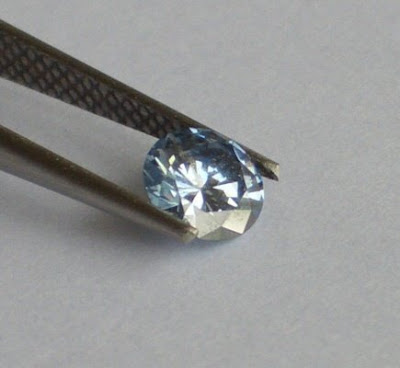 Having made dozens of ‘Memorial Diamonds’, I was chatting idly to my laboratory technicians about ‘what else can we make diamonds out of’? Apart from the ashes and hair, the lads suggested both hoof and horn but surprisingly the umbilical cord of a baby, which apparently is rich in basic carbon and may be able to be used.
With this in mind, I spoke to the editor of Funeral Service Times who was willing to write a feature story mentioning this idea and a request for a potential donor.
Not only did I receive a call from a potential donor – a funeral director whose wife had suffered neo-natal deaths in the past and who was now pregnant again – it turned out that his practice had actually cremated all of my Aunties, Uncles and Grand Parents over the past years. We agreed to keep in touch.
Almost on the due date, he called to say his wife was possibly in labour and being cared for at Hope Hospital, in Manchester adding – “what should I do with the cord if I can get it”?. Being a first for all of us, I suggested he get the nurses to put it straight in their deep-freeze – ready for a collection once I had been in touch with our lab’. We all laugh now, but the best at the time was a ‘TupperWare’ box…………
Jessica was delivered on the 27th of January 2008 at just 4 lbs 11ozs – thankfully alive and well – though the situation was very delicate to say the least!!!
We collected the frozen cord and kept it frozen for a while whilst taking advise from the lab’. It was eventually treated [sorry, can’t disclose how] to become pure carbon. The lab’ then used this carbon in our usual process when making blue diamonds – though with this ‘world first’ we all had to take extra special care.
The HHHP process we use, runs under a pressure around 10,000 tons per square inch at temperatures of 1300c for a calculated long period of weeks – almost under constant supervision. Eventually the raw crystal emerged and the cutter with many years experience chose the clearest section from which to cut the biggest clear diamond possible. After polishing we now have a 0.5 carat Aqua Blue brilliant cut diamond which was almost flawless, icy blue and very clear.
During this lengthy wait, we were all under ‘tenter hooks’ as so much could have gone wrong, but thankfully all has turned out well. The donors called to ask if we could name the diamond – and so we have – The Jessica Diamond, first in the world..
Costs?? Disregarding the initial development, we calculate we may be able to make more diamonds, probably around 1/2 carat in weight for between £5000-£7500, however, we will not be able to predict the exact size or the exact colour blue until we have made a few more.
Mike Kelly, ceo : Amended : 23rd June 2008

Tweet
Get in Touch >>
Memorial Diamonds have been supplying man-made diamonds since 1985, principally using the carbon in cremation ashes or carbon extracted from hair.
Memorial Diamonds Part of the Phoenix Group